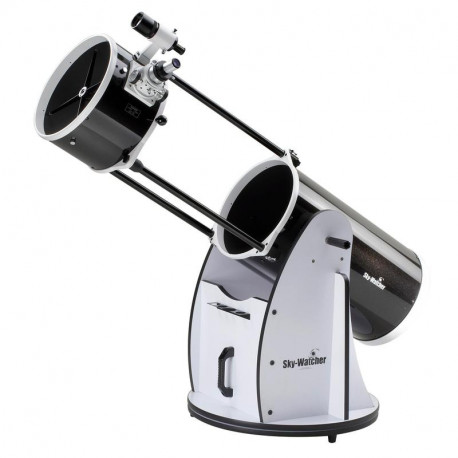 Dobsonian telescopes offer an incredible aperture-to-price ratio. The Dobsonian mount, popularized by John Dobson in the 1970.s, is a simple and efficient method of mounting a Newtonian reflector, based on the Alt-Azimuth principal. Fast and easy to set up, the Dobsonian mount consists of a box-type mounting which allows the telescope to pivot in altitude, while the box itself is rotated on a base in azimuth. The secret of the design is to correctly balance the optical tube and use frictional materials which allow it to be moved easily when nudged but to stay in position when not. The mount is designed to be driven by hand as opposed to slow motion controls.Sky-Watcher Dobsonians provide excellent all round performance for the observation the Moon and Planets and Deep Sky Objects such as Galaxies and Nebulae.

PARABOLIC PRIMARY MIRRORS
Features High Quality Parabolic Primary Mirrors to eliminate spherical aberrations inherent in 'fast' focal lengh reflectors with spherical primary mirrors. The mirrors are parabolized to bring all the light rays to the same focal point to give sharp, constrasty images, which are full of detail.
SKY-WATCHER DELUXE MIRROR COATINGS
Most reflectors today usually have a coat of aluminium as the mirror surface and then an overcoat of silicon monoxide or silicon dioxide to protect it. Silicon dioxide produces a much more durable coat than silicon monoxide but requires specialized equipment to apply it and is therefore more expensive. Protection is needed, because in most reflectors, the mirror is open to the elements and deterioration of the reflective layer reduces the resolution of the telescope.ALL Sky-Watcher reflectors are Multi-Coated with Silicon Dioxide as standard for Optimum Durability and Long Term Performance.
"A precision instrument that breaks the stereotypical Dobsonian mold to deliver stunning planetary and deep-sky performance in a compact, readily transportable package."
"The upper section of the FlexTube containing the secondary mirror assembly and Crayford focuser extends with effortless precision on three rods that are easily locked into position at their greatest extent. Despite repeatedly collapsing and extending the instrument in the course of an prolonged observing session, the FlexTube's optics remained in perfect alignment."
"It would be easy to pigeonhole the 305mm FlexTube as an innovative, transportable Dobsonian for the deep-sky enthusiast, but it's much more than that. Its stunning planetary prowess will have many observers redefining what short focal ratio Newtonians are capable of."
"Having used a wide range of Sky-Watcher Newtonians over the years, I've often expressed my pleasure at the the consistency and precision with which the mirrors are polished and figured. In my Astronomy Now review of this instrument's predecessor, the Skyliner-300P, I wrote of its enviable optical performance for the price. I didn't think the 305mm FlexTube would surpass it, but it does."
"Saturn is often described as the jewel of the Solar System, but to see it in all its 24-carat splendour you need a 12-inch FlexTube. In recent memory I haven't seen such a sharp and richly rendered image of the ringed planet as that delivered by the 305mm FlexTube on the night of April 8th, 2008."
"I was able to use the 305mm FlexTube on a wide variety of celestial objects under what passed for fine observing conditions from my heavily light-polluted suburban locale. Messier 3, the stunning globular cluster in Canes Venatici, was resolved into a ball of innumerable stars, some held with direct vision right across the core. Messier 82, the starburst galaxy in Ursa Major, easily revealed mottled dusty filaments across its nucleus. Edge-on galaxy NGC 4565 in Coma Berenices showed the dust lane along its slender form. And so the list went on."
"Mars, just 6.6 arcseconds in diameter, revealed its 90% gibbous phase with ease. But what surprised me was plainly identifying the Syrtis Major near the planet's meridian at such a distance from Earth."
Ade Ashford, www.scopetest.com