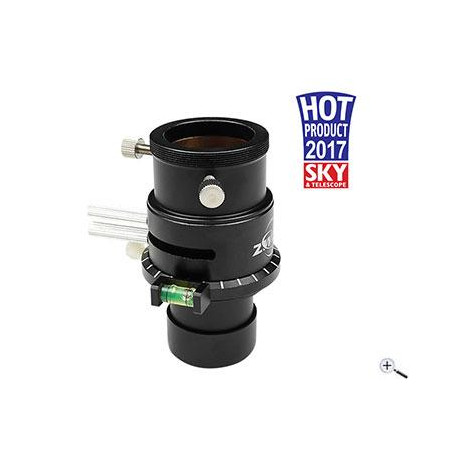 What is an 'Atmospheric Dispersion Corrector' or ADC?

The light from stars and planets is refracted by the layer of air when it passes through the Earth's atmosphere. This refraction varies greatly depending on the wavelength of light; an effect which is known as 'dispersion'. This dispersion causes irritating colour fringing on the edges of planetary discs. The atmosphere thus acts basically like the lens of a telescope with chromatic aberration. Conversely, this means that you will even see colour fringing if you are using a high-quality telescope with no inherent chromatic aberration. The dispersion of the atmosphere cannot be corrected by the optics of your telescope. This is where the compact ADC instrument comes in - the ADC basically consists of two rotatable prisms made ​​of silicate glass. The prisms produce a certain extent of own chromatic aberration themselves, which is opposite to the atmospheric dispersion. The ADC hence corrects this irritating effect. The relative position of the prisms can be freely adjusted via a small slide.

Who needs the corrector?

The effect of atmospheric dispersion strongly depends on the elevation (height) of the object observed appears in the sky. The lower the object is in the sky, the longer the path its light takes through the atmosphere and hence the greater the dispersion produced. The bright planets in particular are not often very high in the sky, especially if you live at high latitudes. The ADC lets you observe planets, not only when they are high in the sky but even when rising and setting, with high brilliance and colour and without chromatic aberration. This makes you much more flexible in your choice of observing time.

Colour fringing is only the most obvious characteristic of dispersion. Especially in photography, dispersion affects contrast adversely, such as in the impressive examples shown. One can increase image contrast in processing, but not without some loss of resolution. This makes the use of the ADC particularly attractive for astrophotography and for this reason this accessory comes with a T2 connection at both ends.

The glass surfaces are specially coated to ensure the ADC has very high light transmittance. The coating is optimized for the range of 300 to 700 nanometres - specifically for astrophotography.