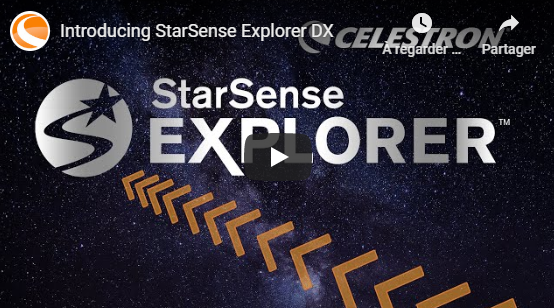 The StarSense Explorer DX 130 mm Newtonian Reflector Telescope from Celestron is a great scope for just about anyone who would like a tech-savvy yet lightweight reflector. By placing your StarSense Explore app-enabled smartphone in the specially designed dock, it will analyze the night sky and calculate celestial object positions in real time. The 5" (130 mm) aluminized mirror is capable of seeing hundreds of objects, including several planets, galaxies, nebulae, and star clusters, and fast f/5 focal ratio produces very pleasing wide field views.

About the StarSense Explorer App

The Celestron StarSense Explorer telescope system uses your smartphone as a self-contained plate solving system. Simply put, plate solving is the same technology used by big observatory telescopes and orbiting satellites to determine the current pointing position by extracting star pattern data from images of the night sky. Celestron’s StarSense Explorer is the first app designed to use the power of plate solving to figure out a smartphone's current pointing position, and when coupled with the specially designed smartphone dock on a Celestron StarSense Explorer telescope, you have a manual telescope system that has the ability to capture an image of the night sky, process that image, extract the star pattern data and determine the center coordinates, all by itself, without requiring telescope alignment from the user.

When you launch the app for the first time you’ll follow a simple two-step process that aligns your smartphone's camera with the telescope's field of view. Once set up, the app displays a scene of the night sky and a bullseye to show you where it is currently looking. Now it is up to you to decide what you want to look at. Easiest and fastest way to do that is simply to choose from the Tonight's Best observing list, which is automatically generated to show you popular objects that are currently visible from your location. Depending on the time of year, your location and the time of night, the list might include planets like Jupiter or Saturn, galaxies, nebulae, star clusters and more.

Choose an object from the list and you will see bright orange arrows pointing you to its location. Keep an eye on your smartphone’s screen and you will notice that as you move the telescope the app will update the pointing location in real time. Keep moving your telescope closer to your target until the arrows disappear and a green bullseye takes its place, letting you know that your chosen celestial object is in your telescope’s field of view! StarSense Explorer technology really is a game-changer!The StarSense Explorer dock is not just any old smartphone holder for your telescope! It has a specially designed integrated mirror that works in conjunction with your smartphone’s camera to gather star pattern data for the StarSense Explorer app. A built-in shade keeps stray light from reflecting off the mirror and messing with the data. X-Y adjustment knobs allow the dock to hold many different smartphone sizes and oftentimes the case can be left in place. The StarSense Explorer telescopes work with a wide range of smartphones, including the iPhone 6 or higher and Android 7.1.2 smartphones that were manufactured in 2016 onward and have a camera, gyro and accelerometer sensor. For a complete list of compatible smartphones, take a look in the Files section on this page and download the PDF.

You can find the app download in the Apple App Store or Google Play. You can also search "Celestron StarSense Explorer" in either store and download the app from the given results. The app is large, so downloading the app with WiFi enabled and connected is suggested. Once the download is complete, open the app and enter the activation code included on the orange postcard found in the telescope's box. This activation code will unlock the app for up to five devices.