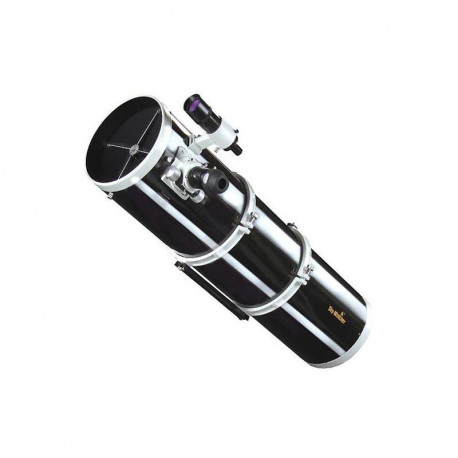 This telescope provides the amateur astronomer with an enormous aperture for detailed deep sky observing. It is one of the largest Newtonian telescopes available from Skywatcher and collects almost three times as much light as a 114mm telescope. This means not only bright, high-contrast planetary observing is possible but that the telescope is also ideal for deep sky observing. While most smaller telescopes only show the cores of many galaxies, this telescope can also clearly show their spiral structure. Globular clusters also appear as incredible objects in this giant, with many of them showing a wealth of individually resolved stars over the entire field of view.

The telescope has a parabolic, diffraction-limited primary mirror which is centre-marked for assisting in precise collimation of the optics. The thin secondary mirror supports and 58mm diameter secondary mirror make for excellent high contrast. The high resolution allows an immense amount of detail to be observed on planets in moments of excellent seeing. Although the telescope is one of the largest which can be used on a parallactic mount, it remains portable at only 14kg. The solid 2" Crayford focuser provides sufficient support for even very heavy eyepieces and cameras. The fine focusing capability makes it simple to find the optimal point of focus. The telescope is predestined for astrophotography with an aperture ratio of only f4.7, allowing this very powerful telescope to be used to take short exposures with a large field of view. Crisp photos right up to the edge of the image can be taken when using an optional coma corrector.

The advantages in a nutshell:

The PDS version of the Explorer comes with a dual speed focuser. This has a 1:10 reduction ratio for sensitive focusing which is most important for astrophotography, but is also very useful for visual observing. The tube length has been slightly shortened compared to the Explorer P version and the secondary mirror has consequently been enlarged in order to further optimize the system for astrophotography.