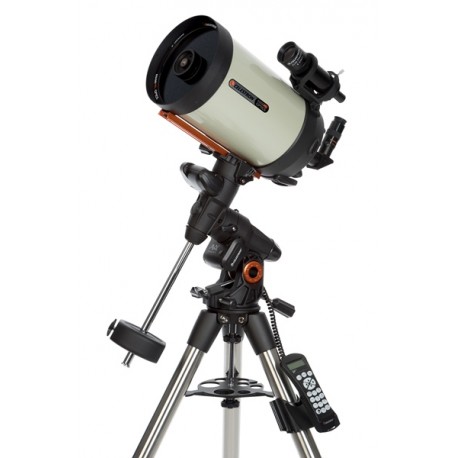 The C8 tube utilisizes a schmidt-cassegrain optic system with a 203 mm opening and a focal length of 2032 mm. Despite the great focal length the tube is very short which makes the telescope compact and easy to move.

The light hits the aspherical Schmidt corrector plane and is projected on the spherical primary mirror. The primary mirror then reflects the light into the secondary mirror reflecting the light right back at the hole at the center of the primary mirror which leads to the eyepiece near the smaller end of the telescope. The structure is completely airtight and is not affected by atmospheric turbulence which would blur the image. It also is optimal protection against dust residue. The Schmidt corrector plate has a multi-layer treatment guaranteeing an image without any visual anomalies.

This telescope delivers a very good image, this is emphasised by the contrast and the sharpness and procures a certain pleasure when looking at the sky.

The schmidt-cassegrain system offers a large field of view and is perfect for observing deep sky objects. This telescope has a focal ratio of 10 making astrophotography possible (with an equatorial mount long exposure is possible).

The development through the primary mirror guarantees an important sharpness in the picture, allowing the instrument to work with any accessory (due to the weight of the telescope there is no need for a massive mount contrary to other types of telescopes).

A fairly simple alignment is possible by looking through the eyepiece. The telescope can also be used for terrestrial observations (like bird watching).

The eyepiece tuning is very stable, an adjustment is practically never necessary. All eyepieces are tested by Celestron on a Carl ZEISS optical table, they are tuned and given a serial code.

The term “EdgeHD” stands for a new optical conception: the “aplanetic schmidt-cassegrain design”. After over 50 years of success, Celestron revolutionised the classic SC telescope. Celestron’s EdgeHD telescopes (“Edge High Definition”) possess all the characteristics of true astrographs. Furthermore, this telescope produces images without any distortion and a perfect definition all the way to the edge of the large photographic and visual field of view. In addition to the coma outside of the optical axis, which is corrected by other systems (”sans coma”) available on the market. Many telescopes are advertised as astrographs. But the images of needle tip-like stars so sought after is produced by telescopes along a curved image plane. On photos taken with modern CCD cameras we can see a notable Petzval field curvature which increases near the edge of the image, and all the more the sensor is big. The stars stay circular, certainly, but they swell near the edge and develop small rings (“donuts”). On Celestron’s EdgeHD telescopes, besides the coma, this Petzval field curvature is equally corrected all the way to the edge; this makes it so that even the photos taken with the big CCD sensors are perfectly clear and show the stars with the same regular size over the entire sensor, all the way to the edges of the edge of the field of view. This results in an improvement in angular resolution and the limiting stellar magnitude, compared to competitor telescopes with the same aperture. Otherwise, the Celestron XLT multi-layer treatment equally allows EdgeHD telescopes stands out when compared to other similar telescopes on the  market.

The mecanical sytem and optical tube of EdgeHD telescopes have been completely modified: a blocking system maintains the primary mirror in any focal position without exerting any pressure on the optical elements. So the image on the sensor is always stable, even during long exposure. Air vents behind the primary mirror ensure a rapid heat exchange, so that the telescope is cooled down in record time. Furthermore a filtration system prevents all entry of dust into the tube. The telescopes are entirely compatible with the new HyperStar system thanks to which, with a couple changes, transforms your telescope into a Schmidt digital camera.

The new Advanced VX telescopes represent a new standard for middle class telescopes. The mount has been replaced with a new design. On this occasion, the new requirements of astrophotography are taken into account. The Advanced VX technology offers lots of properties of big parallactic Celestron mounts and with a very attractive price.

The Advanced VX mount, which has been especially made for an optimal image performance for small telescopes, is the ideal platform for astrophotography with small telescopes. Although, it may be more advantageous for your small telescope to be on a polar alignment mount and to have a autoguidance system for any star. For telescopes heavier than 135 kg, you have intelligent funtions from our big parallactic mounts. Thanks to the PEC system (Periodic Error Correction), the error which appears with mounts equipped with a worm drive, can be corrected, so that you will be able to follow your target during long exposure thanks to the permanent correction of the programmable periodic error correction system. Moreover, it is possible to observe objects well beyond the apex without having to change the position of the mount. Thus you observe the most interesting parts of the sky, without interruption. The base of the mount is much larger than the previous models, increasing the stability of the structure under heavy load. The improved motors provides a greater torque and allows an efficient correction: the imbalances due to the load can be easily corrected.

Experienced photographers are able to estimate how easy it is to transport this mount to an observation point void of any parasitical light. For beginners in this field, the Advanced AVX is the best choice for their first steps in astrophotography and will offer good services for years to come.