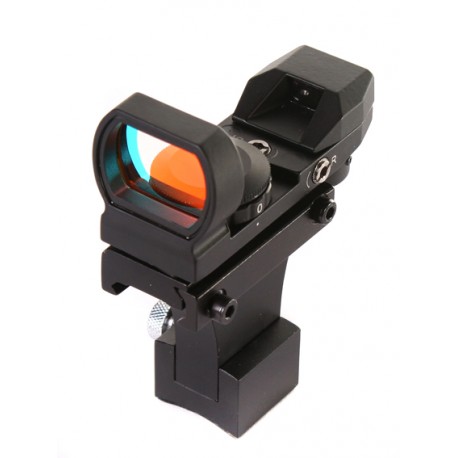 This Red Dot Finder (RDF) comes with a stalk and quick release bracket to fit the Altair / Starwave TM and Skywatcher refracting telescopes, and in fact most other telescopes by means of the universal base.

It can be attached to the Starwave TM focuser by means of two included M4 screws . Everything you need is included to attach the finder scope bracket to the focuser.

The RDF unit is high quality made from metal, uses a CR2032 battery, and has variable illumination with a choice of 3 reticules (single dot, cross-hair and circle) selected from the back of the unit. The finder stalk has a dovetail profile on the base which fits most other telescopes.

The sturdy metal finder stalk has a standard "weaver rail" and the "UNIFBR" Universal Finder Scope Base has an M4-M5 cross-slotted hole pattern allowing attachment to most focusers and optical tubes. Even if it doesn't quite fit, it's easy enough to make DIY alterations the UNIFBR or the telescope to attach it. The UNIFBR can also be bought separately allowing you to use a single RDF and stalk with several telescopes.

ATTENTION: SPECIFY YOUR TYPE OF SUPPORT FOR THE FINDERSCOPE BEFORE PASSING THE ORDER (info@astromanie.ch)