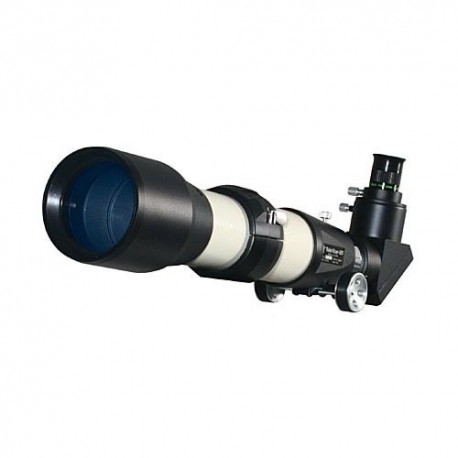 The Televue-85 combination of the apochromatic doublet lens and the special dispersion glass come together in the genius of the Tele Vue design to provide a stunning 4.4º rich-field which will dazzle the vision with delicate jewel-like stars.

"Deep-sky views with the Tele Vue 85 were equally impressive. At 17x with the 35-mm Panoptic, stars in the open cluster M44 shone like diamonds against a dark background." -- Sky & Telescope Magazine, September 1998

The apochromatic performance of the new Nagler designed, fully multi-coated 2-element objective and 2" Everbrite diagonal produce natural stellar and planetary color rendition even at the highest useful powers. All air-to-glass surfaces in the Tele Vue 85 are multicoated to provide high transmission and virtually eliminate internal reflections. The tube's textured, flat-black inner surface also suppresses reflections and helps deliver high-contrast images. The diagonal itself is know for its legendary full 99% reflectivity properties and permitting the use of long focal length 2" eyepieces. Whether your pushing beyond the theoretical magnification limits of 150x or taking your breath away with incredible low power, picture window views of the heavens, the Tele VueTV-85 is there to deliver.

"Dawes' limit states that an 85-mm objective should resolve double stars separated by as little as 1.3 arcseconds. My first double-star test was Gamma Leonis. This beautiful pair has a 4.4-arcsecond separation and components of magnitude 2.2 and 3.5. It is considered easy for small telescopes. I centered the star using a 35-mm Panoptic eyepiece, which yielded a tack-sharp 17x image. Switching to a 7-mm Nagler upped the magnification to 85x, which easily split the double. I then tried the 15-mm Panoptic and 5x Powermate to obtain 200x. The stars were sharp Airy disks surrounded by extremely clean concentric diffraction rings. A wonderful view! My next target was the 4th-magnitude double Gamma Virginis, with a 1.7-arcsecond separation. The stars were easily split at 200x. Pushing further, I tried the 7-mm Nagler with the Powermate for 428x. The stars appeared sharp and clean with perfect Airy disks surrounded by concentric diffraction rings. The only image degradation was due to the seeing, not the optics. Truly awesome! I had the same visual impression, both at 200x and 428x, when I turned the scope to the 1.6-arcsecond double Xi Ursa Majoris. Incredible!

While a typical eye can resolve Dawes' limit with as little as 12x per inch of aperture, most observers are more comfortable with 20x to 30x and some even prefer 50x or more. Using the Tele Vue 85 at 428x called for a remarkable 125x per inch of aperture! But that's not the end of the story. After the double stars, my next target was the Moon, since I wanted to test the scope for signs of color aberration. If any was present, the Moon's bright limb projected against a dark sky would be where I'd find it. The evening was very steady with the nearly first-quarter Moon high in the western sky. I began with the 20-mm Plssl. The 30x view was incredible with the brilliantly lit Moon standing out in sharp contrast against a jet-black sky. There were no signs of internal reflections to degrade the image. Upping the power to 40x with the 15-mm Panoptic gave an even better view. Numerous craters along the terminator were razor sharp and the ghostly bluish glow of earthshine was clearly visiblea breathtaking sight. Next I added the Powermate for a 200x tour of the lunar surface. Mountain ranges, rays, rilles, and microscopic craters stood out in sharp, bold relief. For nearly an hour I watched mesmerized as the shadow cast by the rim of Theophilus moved across the crater's floor." -- Sky & Telescope Magazine, September 1998

But, the Televue-85 isn't only a night owl. You'll love this telescope for bird watching and nature studies, too. The included 20mm TeleVue Plossl eyepiece provides outstanding scenic views - from the nesting eagles to the sailing ships. The small size and light weight of the TV85 permit the use of lighter-duty tripods for easy field carrying and transportation, making it an ideal companion for nature hikes, vacation trips and travel. The padded shoulder bag provides protection and room for the scope and six eyepieces, and this true rich field telescope can even be considered "carry on" luggage.

As incredible as the Televue-85 performs, it the lasting qualities that count when it comes to making a serious scope investment. Not only is the TV85 a work of optical art - but mechanical as well. The 2" rack and pinion focuser was designed with a brass, non-marring clamp ring instead of a single set screw. Not only will this hold your accessories more securely in place, but it won't mar the barrel of your prized optics - and neither will the 1.25" adapter. The focuser glides smoothly and cleanly, with just enough tension to keep from making corrections too quickly - yet loose enough to keep from feeling "stiff" in cold weather. By including simple standard equipment such as a clamshell tube holder, you can easily mount it to an optional photo tripod or enjoy the optional lightweight and transportable Televue TelePod with your system.

"The Tele Vue 85mm f/7 APO refractor is truly an incredible instrument with superb, well-corrected optics. The scope's mechanical construction is also first class all the way. Whether you are traveling half way around the world to photograph a total solar eclipse or just casually observing from your backyard, the Tele Vue 85 offers today's amateurs an extremely powerful, compact instrument capable of delivering stunning images of the universe around us. This scope is a real gem!" -- Sky & Telescope Magazine, September 1998

Photographers will love the Televue TV-85. For those who are looking for an outstanding tele-photo lens, optional Televue adapters will quickly turn the TV85 into a 600mm (12x) f/7 performer worthy of your best nature and sky shots. If you demand high quality optics, then this is the scope for you.

"In addition to being a top-rate visual instrument, the Tele Vue 85 doubles as a very high quality lens when coupled to the optional field flattener, which increases the focal length slightly to 660mm (f/7.8). This combination delivers a field about 3 by 2 on 35-mm film, which is perfect for photographing objects such as the Lagoon and Trifid nebulae, the Pleiades, and the Andromeda Galaxy." -- Sky & Telescope Magazine, September 1998

Just look at all you get in the Televue TV85 Package....