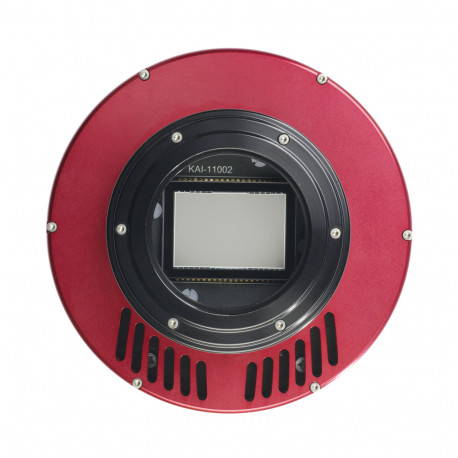 The Atik 11000 is Atik’s top of the range high resolution, large-format cooled CCD camera. It incorporates a huge 37mm x 25mm sensor, and is the camera for the uncompromising user who is looking to create stunning high-resolution deep sky images using the Kodak KAI 11002 CCD sensor; and is available in mono or one-shot colour cameras.

According to availability at the supplier. Usually between 7 and 15 working days. Contact us for more informations

It is difficult to get an impression of just how big the sensor is without seeing it at first-hand, but the cameras imaging results are amazingly detailed. They can be printed out at A3 size or beyond, or simply enjoyed on a computer monitor.

The other cameras in the Atik range use Sony sensors, but the large-format cameras incorporate Kodak devices. These have gained a great reputation in astrophotography, and offer qualities not available in the Sony CCDs. However, optimum performance from the Kodak chip is only obtained with the use of highly sophisticated control electronics and advanced cooling systems, and this is where Atik's design and build expertise comes to the fore.

The Kodak sensors require dark frames to be used for calibration, and these must be taken at the same temperature as the primary image. The Atik 11000 achieves this through the provision of full set-point temperature regulation using a two-stage Peltier element and fan. This can provide cooling to 38 degrees below ambient, and will be suitable for the majority of conditions.

For more demanding use, water can be pumped through the camera's internal heat exchanger. When water cooling is employed, the maximum level of cooling depends on the water temperature. Approximately 45 degrees of cooling can be achieved using water from a typical cold tap.

Such efficient cooling cuts thermal noise to an absolute minimum and reduces the prevalence of hot pixels, but it raises the risk of condensation forming in - or on - the camera. A high-efficiency desiccant is used to dry the air inside the sensor chamber, so preventing internal condensation. Meanwhile, condensation on the outside of the camera is avoided through the use of heater elements which gently warm the window. The power supplied to this heater is controllable through software so that it can be adapted to the environmental conditions.

The Atik large-format cameras have been designed and built to meet the needs of the most demanding users, yet offer an unparalleled simplicity of use. They have only two sockets - a 2.1mm socket for the 12V power supply, and a USB2 port for communicating with your computer. The cameras are also compatible with our highly acclaimed Capture software, as well as with Astroart, CCDSoft and Maxim DL.

The Atik 11000 is fitted with a KAI 11002 class II sensor as standard. This allows for a small number of column defects. Alternatively, a class I sensor with no column defects can be specified. Does the CCD grade matter? Well, we feel the price premium placed on the class I sensor is not justified when the camera is going to be used for astro-imaging.

In short, this is because Kodak's grading system uses a test in which the CCD is not cooled; exposures are for fractions of a second; and the sensor is read out several times a second. But conditions for the sensors are very different in astro-imaging because the sensor is cooled; exposures are typically for many tens of seconds; and readout takes several seconds. It is also expected that the images will be corrected with a dark frame. The upshot is that Kodak's grading tests do not reflect astro-imaging performance in a useful way.

We use only the latest generation of KAI 11002 sensors, which have anti-reflection coatings on both sides of the glass cover. This reduces reflection artifacts generated between the CCD surface and the cover.

Available in Mono or Color version, specify by mail during the order please